I feel a little uncomfortable making such a vain blog post, but a lot of people have been asking me how my robotics team is doing this year. Now, I will point them to this blog for their update and hopefully they will consider checking out the DONATE section of the website, as well!

Last week, we competed at the Virginia State VEX Robotics Championships and we won both the Excellence Award (commonly called the “Overall Award”) and the Teamwork Championship! I can’t tell you how excited and nervous I was! There were a lot of great teams competing, and we were very fortunate to have some of our best performances when they counted. Believe me, I’ve had my share of standing on the competition stage and having my robot not turn on!

I also want to thank my coach and teammates who are all incredibly capable and committed. They make the long hours of work not seem so much like work. People don’t believe me when I tell them how many hours per week we commit to robotics. First off, there is no “robotics season.” For us, it’s all year long. We typically meet for an entire day (8 hours or more) either Saturday or Sunday every weekend. However, that usually becomes both days when we are preparing for tournaments. We also meet one to two evenings during the school week for a few hours each night. However, in the end, it is all worth it and fun. Plus, sometimes we win! 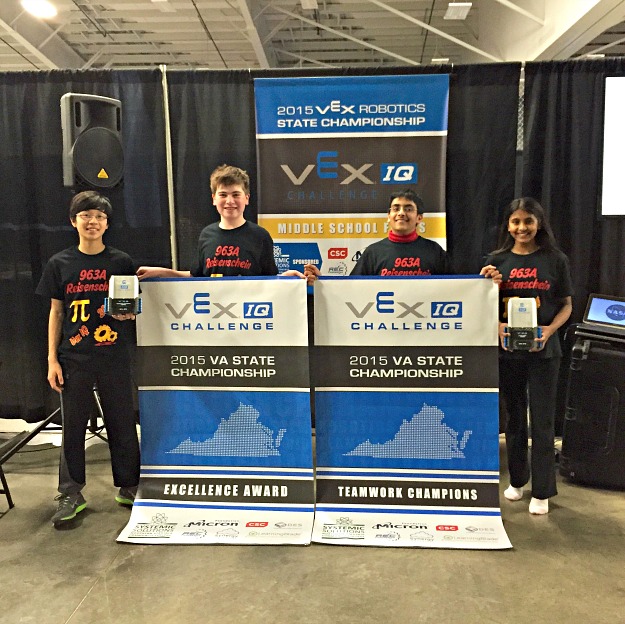 My fantastic teammates and I with our Championship Banners!